Surfing the Energetic Wave of Solar Cycle 24: An Opportune Time to Leverage Personal and Global Transformation

Much has happened since my last GCI commentary. New members are joining the GCI community from around the world and the membership has surpassed 17,000. In the research aspect of GCI, we have been testing a new sensor design since June 2009. Some of the members have noticed the brighter colors in our spectrogram data, which are due to the higher sensitivity of the sensor. The new sensor utilizes magnetic antennas and an induction coil with a low noise amplifier. The advantage of this new sensor is the compact design. Also ultra low frequencies, called geomagnetic pulsations, from 1 to 1,000 hertz can now be detected by the sensor. 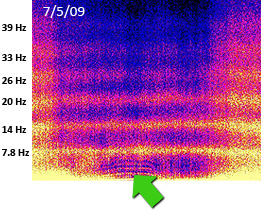 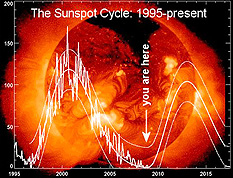 The number of sunspots is an indicator of overall solar activity, in particular the sun’s output of UV radiation. The number of sunspots also correlates with the number of solar flares. Daily sunspots can vary between 0-200 or more. A sunspot-rich highly active sun causes an increase in the plasma density at the upper edge of the atmosphere, which is called the ionosphere. Weeks and sometimes whole months have recently gone by without a single sunspot. According to NASA, this solar quiet has dragged out for over two years, prompting some observers to wonder if the sun is napping! Scientists, however, are observing the reemergence of sunspots and it appears that the next 11 year Solar Cycle 24 is beginning to pick up slowly. See the graph for the sunspot cycle from 1995 to the present and the predicted Solar Cycle 24 by NASA above.

Interaction between the Sun and the Earth
The following paragraph is based on personal communication with Dr. Friedemann Freund of NASA.

A sunspot-rich highly active sun causes an increase in the plasma density at the upper edge of the atmosphere, which is called the ionosphere. The plasma density is particularly high over the sun-lit side of the Earth, corresponding to a large number of ions and free electrons. These ions and electrons cause the ionosphere to be electrically highly conductive. As the Earth rotates, the Earth’s magnetic field also rotates. This creates an interesting condition somewhat akin to an electric motor: as the Earth’s magnet turns underneath the stationary, electrically conductive plasma on the sun-lit side of the globe, the plasma forms current vortices above the northern and southern hemispheres. They flow 100 km and more above us. They carry several hundred thousand amperes. As the Earth turns underneath, these current vortices induce – in a diurnal pattern – electric currents in the Earth’s oceans and the Earth’s continents. In the solid Earth these induced currents produce a force that pushes the Earth’s crust into different directions depending on the time of the day. Integrated over sections of the Earth’s crust that behave as rigid plates, these forces can carry energy equivalent to magnitude 5 or larger earthquakes. When solar flares arrive at Earth, they impact the ionosphere, deform it and cause extra high levels of ionization. Thus they cause extra large induced currents in the solid Earth and extra large forces.

What is described here is a fascinating interplay between the sun and the Earth, mediated by the ionosphere. The forces produced in the solid Earth can be felt anywhere, on all continents. They follow a diurnal pattern, a seasonal pattern and a decadal pattern linked to the sun’s activity. In stable regions of the continental crust, e.g. in seismically inactive regions, the effect of these forces may be subtle and difficult to discern. In seismically active regions, however, their effect can be seen in a striking way in their capacity to trigger earthquakes. This triggering takes place when the vector of the induced forces coincides with the local tectonic stress vectors and when rocks along some faults are already stressed to near the breaking point. Under these conditions the induced forces are often enough to push the system "over the edge" and trigger earthquakes. The observed diurnal, seasonal and decadal variations in the seismicity patterns around the world are probably the most striking expression of these forces that come to us, ultimately, from the sun.

One of the remarkable effects of the induced forces is that they can stress the rocks at depth to the point where they release large numbers of highly mobile electronic charge carriers. These charge carriers, called positive holes, can spread through kilometers of overlying rocks and come to the Earth’s surface. There they set up very steep, though microscopically short-range electric fields. When these fields reach high enough values to field-ionize air molecules, the air begins to be filled with positive ions. The medical community has known for decades that positive airborne ions increase human moods and activity.

Interaction between the Sun and human excitability
As mentioned in previous commentaries, solar flares have not only been associated with global weather patterns, but also human social activity.
During World War I, A. L. Tchijevsky, a Russian professor of Astronomy and Biological Physics, noticed that particularly severe battles followed solar flares during the sunspot peak period of 1916-17. Intrigued by the connection of human behavior to solar physics, Tchijevsky constructed an "Index of Mass Human Excitability". He compiled the histories of 72 countries from 500 BC to 1922 AD to provide a database to articulate his correlations. After rating the most significant events, Tchijevsky found that fully 80% of the most significant human events occurred during the 5 years or so of maximum sunspot activity.

The solar connection to terrestrial events has been studied by scientists ever since then, but most of the focus has been on the sun itself and on the impact of the solar cycle on the climate, weather, agriculture, commodity markets and other non-human phenomenon.

When the data is examined, it appears that when solar-geomagnetic activity is changing most rapidly and is on the ascent or on the descent of a solar cycle, when solar spots are rapidly increasing or diminishing respectively, it has the greatest potential to affect human moods, behavior patterns, creativity and historical trends.

Throughout history, cultures such as Egyptian, Hopi, Ancient Indian, Mayan, Aztec and Chinese, believed that their collective behavior could be influenced by the sun. Seers such as the famous psychic Edgar Cayce, claimed that humans meditating together could influence solar activity and that such meditations can help to establish a more peaceful future and reduce individual and collective stress. More and more groups are continuously forming with this intention. They are stanch believers that prayer, meditations and collective intentions, over time, can help upgrade consciousness and facilitate positive outcomes for the planetary whole. This is especially relevant during times of increased "human excitability," and hence increased creativity and opportunity available from the energy influxes which occur during the increase of solar activity.

Evidence for this is provided from a historical study conducted by Suitbert Ertel ("Bursts of creativity correlate with solar activity"-1997) who examined the association between solar activity and oscillations in human creativity. Using time series analysis he examined the periods of flourishing and years of increased creativity in science and the arts (e.g. painting, poetry and fiction). The results clearly show that during increased solar activity, human creative activity also peaks. Tchijevsky contributes this observation to the fact that the influence on the human nervous system is greatest when the amount of emitted energy by the sun and radiation of the earth are greatest.

We are at the beginning of the next Solar Cycle 24, which will increase over the next four to six years. There are always pessimistic and fear-based projections related to any new energetic cycles that have an interactive influence with the planet. However, the increasing light and coherence on the planet facilitates new choices and the power to change our responses to energy influxes. That’s what the global consciousness shift is about: a chance to elect heart-based choices, then take charge and do things differently and respond with more consciousness, respect, love and compassion. It’s time to end the tendency to create and repeat the same old stress-producing "play-outs" each time there in an energy influx on the planet—such as solar activity and other energetic influences—that could bring benefits and creative opportunities to help humanity spiral upward towards the next dimension of active intelligence and heart-based living.

More and more people are realizing that solar and universal energetic influxes are part of a natural cycle—they are not "out to get us". Their effects depend on how we choose to respond to them. These influxes can be a great add-on to humanity. Yet people have to take responsibility for their own energy and elect to use this creative energy influx to create deeper connections and more caring interactions with each other and Mother Earth. The GCI’s intention is to help provide self-transformational tools and technologies that help people align with their higher potentials for empowerment, in order to facilitate positive global change during the influx of the next solar cycle.


The GCI hypothesizes that:

1.All living things are interconnected and that we communicate with each other via our biological and electromagnetic fields.
2.Not only are humans affected by such energetic fields, but conversely the Earth’s energetic systems are also influenced by collective human emotions and consciousness. Much of the planetary field environment is made up of the collective consciousness of the inhabitants.
3.Large numbers of people intentionally creating heart-coherent states of care, love, compassion and appreciation will generate a coherent standing wave that can help offset the current planetary-wide wave of stress, discord and incoherence.

A major factor in the global consciousness shift is enough people realizing the need to become more self-responsible for their own energy, thoughts, feelings and actions. It is each person’s responsibility to establish balance within oneself and with the Earth. Every action counts, and by "taking charge" and increasing our coherence baseline, this shift and consciousness upgrade will be reflected in the global field environment as well. This in turn will create a mutually beneficial feedback loop between human beings and the Earth’s energetic systems.

Though not fully proven yet, we at the GCI research center feel that using our heart’s intelligence to balance and manage our mental and emotional systems, along with meditations to increase our coherence, will raise our personal frequency pitch and energetically align us with the creative opportunities and benefits that can come with this next cycle of solar activity. More people are becoming aware that they have a choice in how they interact with new energy influxes—be they spiritual, astrological, solar, lunar, environmental or social.

The Global Coherence Initiative is only one of the many emerging groups working to facilitate the planetary shift in these adventuresome and sometimes challenging times. No facilitation is "more important" than another. With a noncompetitive spirit and genuine care, all groups and individuals add a helpful piece to the grid and are energetically connected to each other at the heart level to serve the greater whole. We at the GCI honor and appreciate the love and care these groups and individual light workers from all over the world have put into this cause.

With gratitude and appreciation,