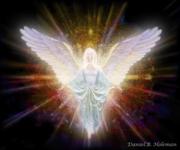 Free spiritual book and online workshop. A place to send those you love who will soon be awakening to the Truth.

It was through the joys of creativity and in the sharing of it that God desired to separate Himself into smaller and smaller fragments. So, in an Outbreath of God, seven Spirits stood before Him. These Spirits then divided themselves down through the various levels to that of individual souls. And, with each split, the fragments lowered their frequency.[i]

He chose us in him Before the creation of the world.
Ephesians 1:4

Every one million years, God takes in a breath and these fragmented souls return home to Him. We are all children of God and, as part of God, we are God. And now, another Inbreath has begun.

Now if we are Children, then we are heirs —
heirs of God and co-heirs with Christ. Romans 8: 17

Incarnation is no longer of value to our spiritual growth. So we no longer have to reincarnate to grow spiritually. We can do so by increasing the amount of Light our cellular structures hold.

We are ascending to a higher level – a higher dimension. And so is the Earth. Not only the Earth, but also the Solar System, the Galaxy, the Universe, the Multi-Universe and the Omniverse. This is God on all levels. And we are a part of God.

Historically, each InBreath of God has resulted in a change in the Earth's magnetic field. But, long ago, during the Fall of Man, our choices caused Man to sink to a low level of consciousness. In his present state of consciousness, he has forgotten that this game of Life is simply an illusion of the mind. And, although Time is running out, he continues to play the game.

Before the year 2000, it wasn’t known in the higher realms if God would override what Freedom of Choice has now manifested on Earth. The question was, would He decide to intervene at the end of this game and awaken humanity to its Divinity in order to prepare him for what would otherwise be the inevitable? And, in so doing, would that be allowing His children the freedom to choose their direction or would that be interefering with their free will?

I hold the keys of death and Hades. Revelations 1:18

This was the final decision of God...

[i] Sarah Biermann in her channelling of Ahrazu (Osiris)

This group does not have any discussions yet.

You need to be a member of THE AWAKENING to add comments!